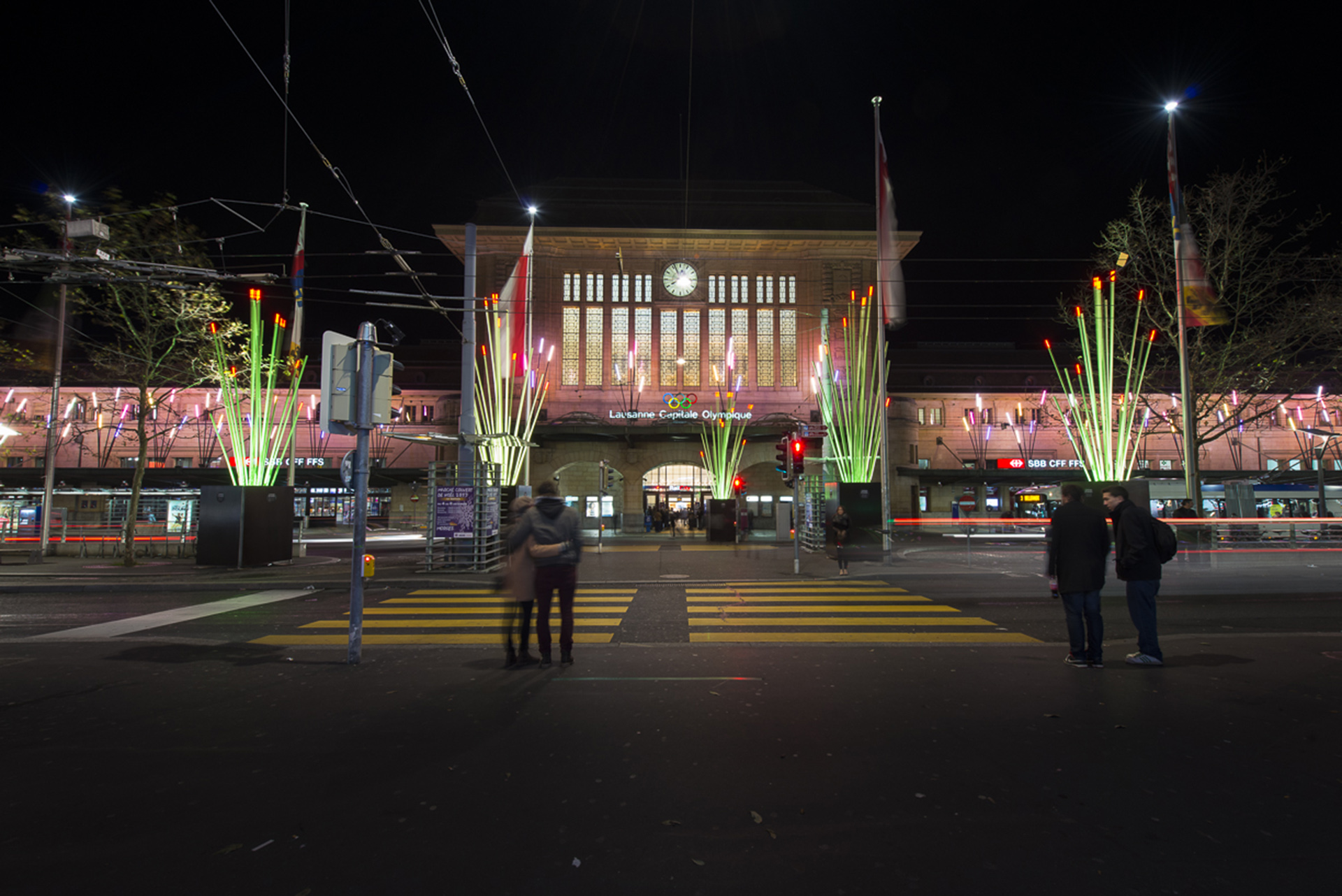 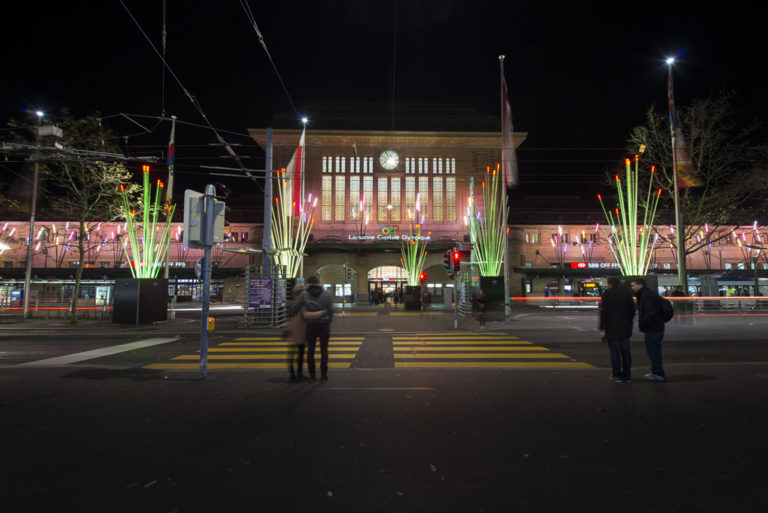 It is also through Lausanne that he discovers the Waldensian country, the land of his friend the Baron Godefroy de Blonay who invites him to his castles. It is during this period that Coubertin decrees in an article of the Olympic Review that Switzerland is the “queen of sports”, that he starts to discover Romandie, and that he considers establishing a permanent headquarters there for the international Olympic Committee (IOC). The train station of Lausanne (which was completely rather than reconstructed between 1911 and 1916) is still the arrival point of many visitors who visit the “Olympic Capital”, the title given by the IOC to Lausanne in 1994. Today, the train station proudly wears the Olympic rings drawn by Coubertin in 1913.

2. The Palace of Rumine

In May 1913, Coubertin organizes in Lausanne a congress of athletic psychology and physiology first envisaged in 1911. This congress, preceded by an annual meeting of the International Olympic Committee (IOC), is recognized as the 5th Olympic Congress. 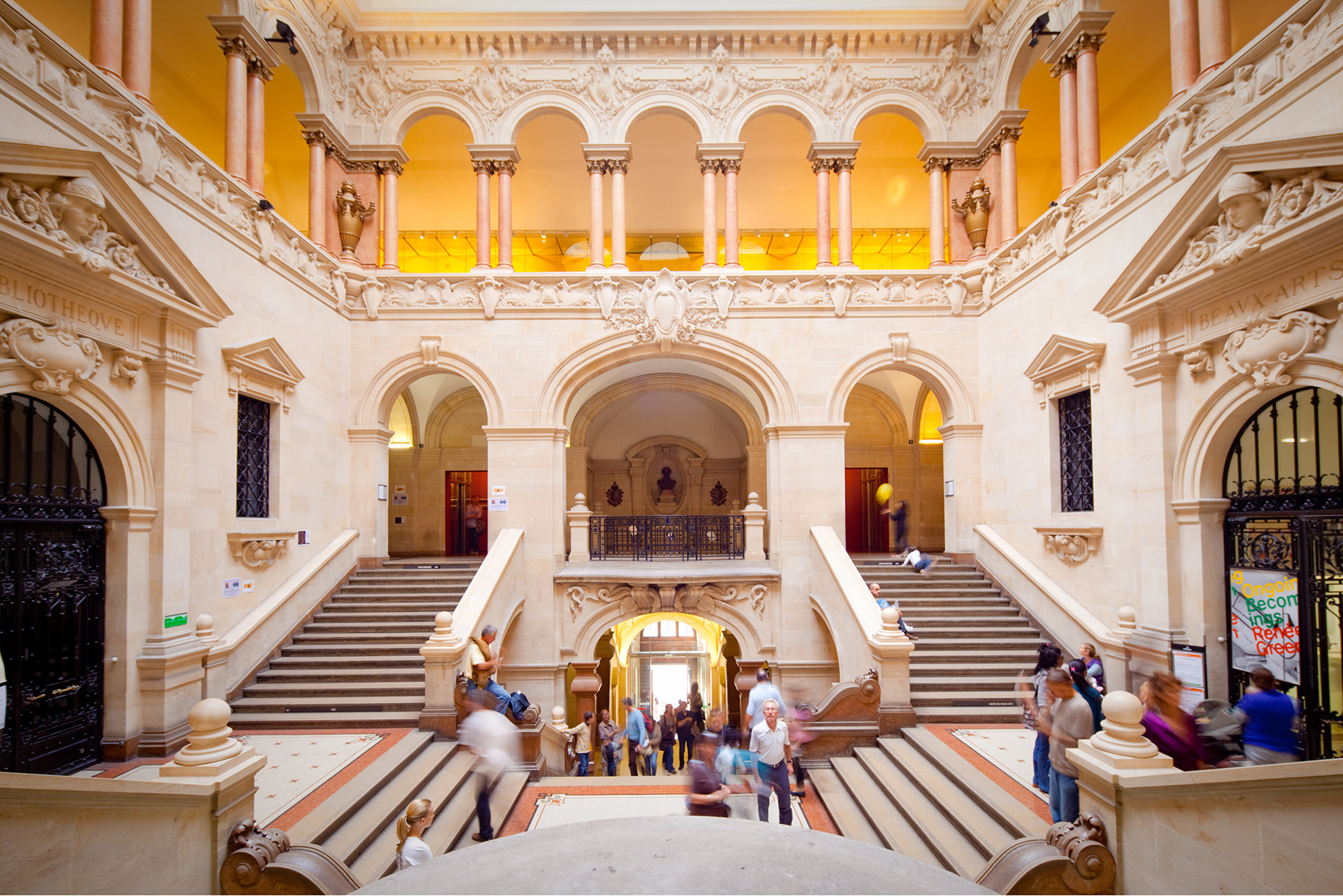 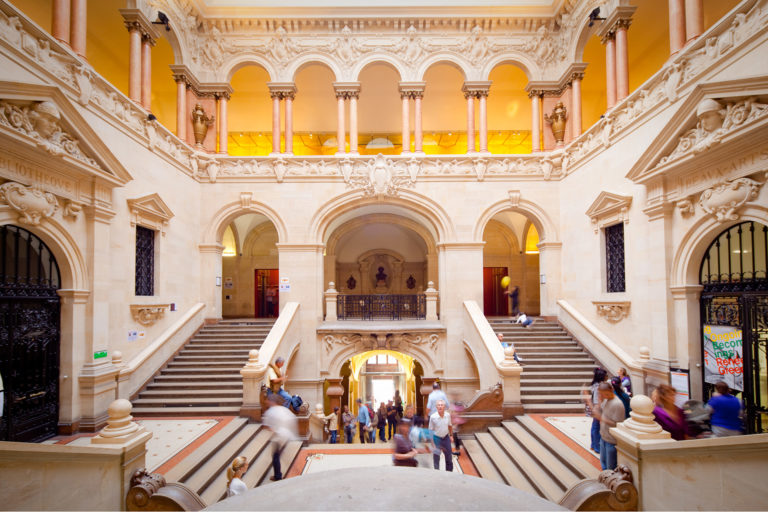 It is organized at the Palace of Rumine, then the headquarters of the University of Lausanne, with whom Coubertin wanted to work closely. Through this meeting, he also wants to get better acquainted with the IOC in Lausanne, in the canton of Vaud and in Switzerland to prepare for future projects. Today, the Palace of Rumine houses the cantonal university library and many museums served by a monumental staircase. The aula of the university, where the opening ceremony of the congress takes place, is used today by the Grand Council (legislative) of the canton of Vaud.

3. The City Hall of Lausanne 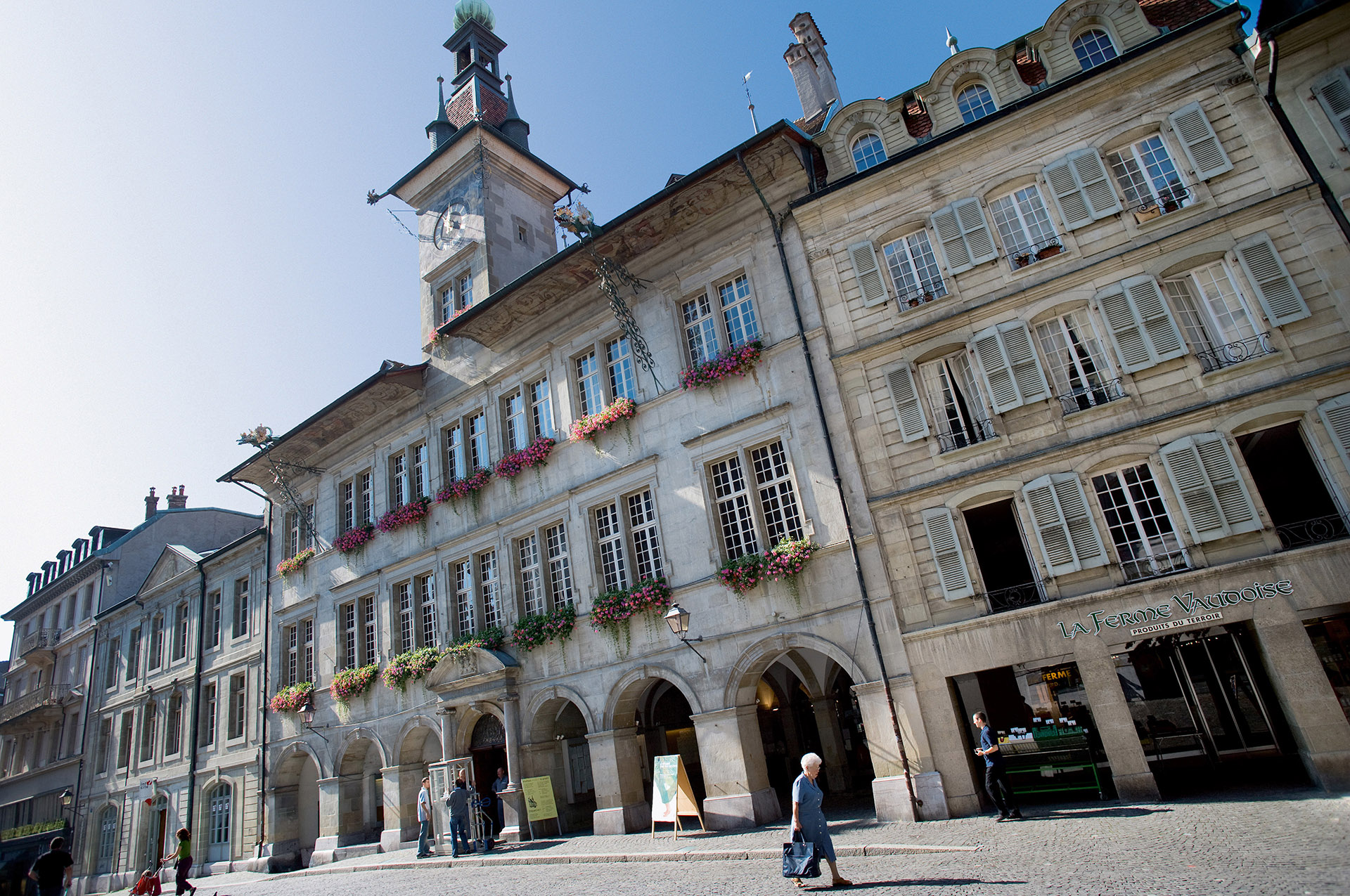 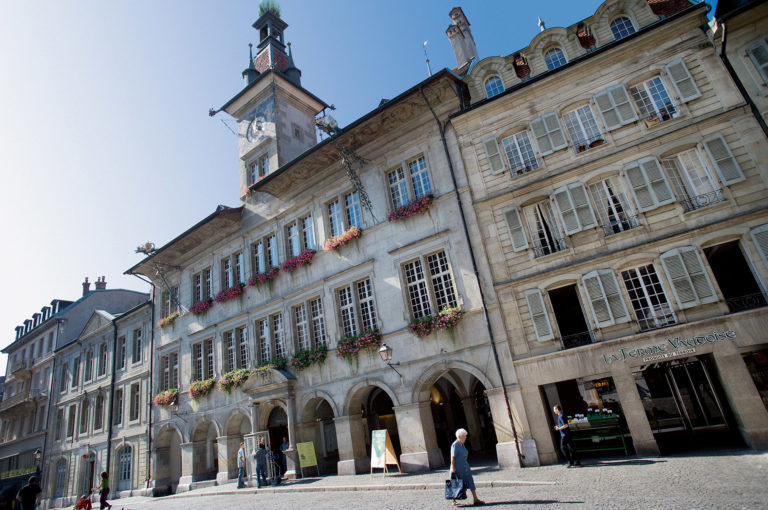 On April 10, 1915, the mayor Paul Maillefer and the Municipality of Lausanne acknowledge this transfer during a small ceremony in the presence of Coubertin and de Blonay, as well as four members of the organizational committee of the congress of 1913. The minutes of the meeting note that the president of the Waldensian government Ernest Chaud apologized and that the president of the Confederation Giuseppe Motta sent a telegram of welcome. The room of the Municipality used at this time still exists today just like the rest of the building even if the municipal administration has greatly expanded.

As soon as the IOC is installed in Lausanne, Coubertin asks the Municipality to put the premises at his disposition for his project of the Olympic Institute that he envisions as the prototype of institutions to propagate sports and popular culture in the cities. 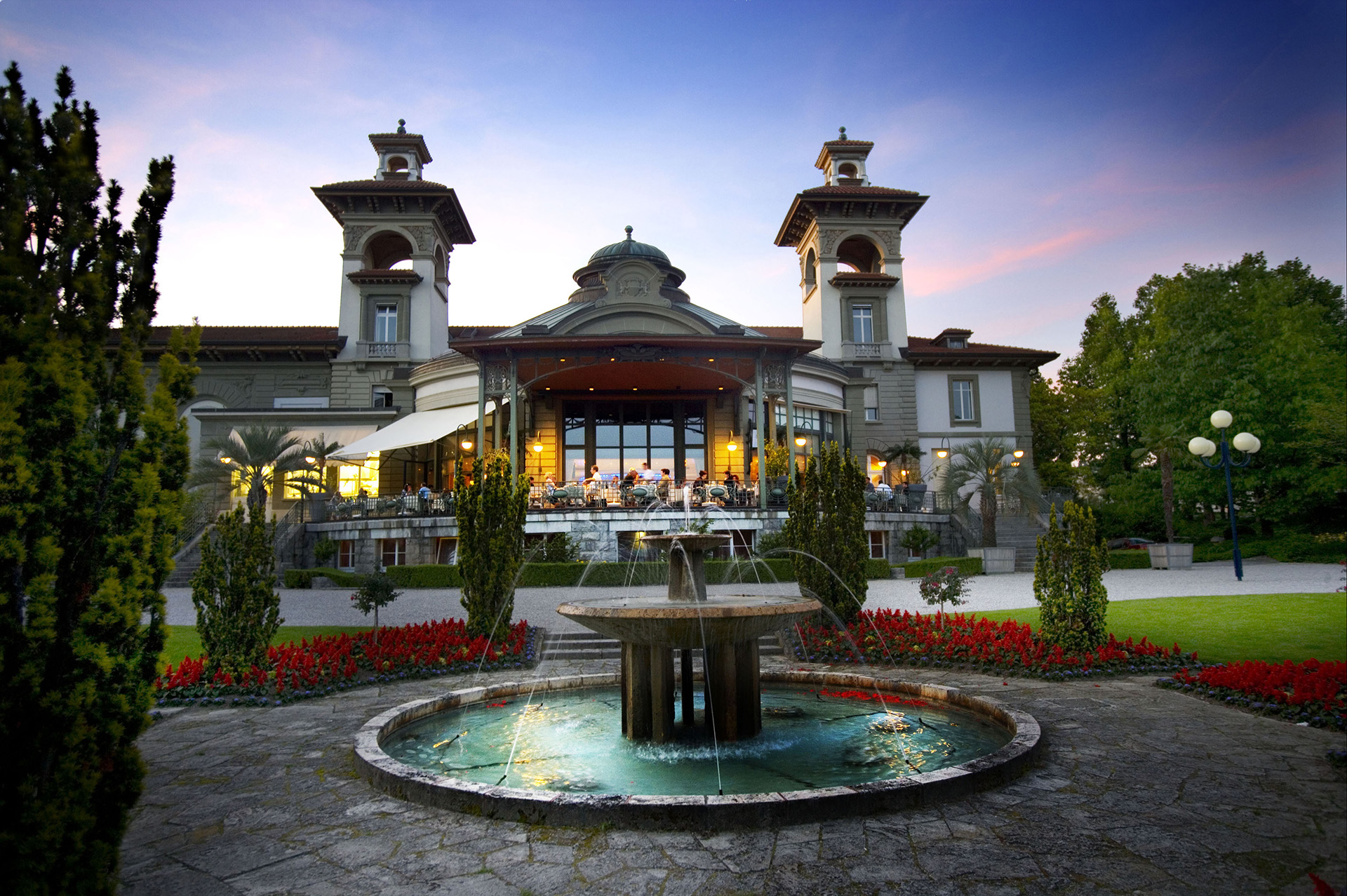 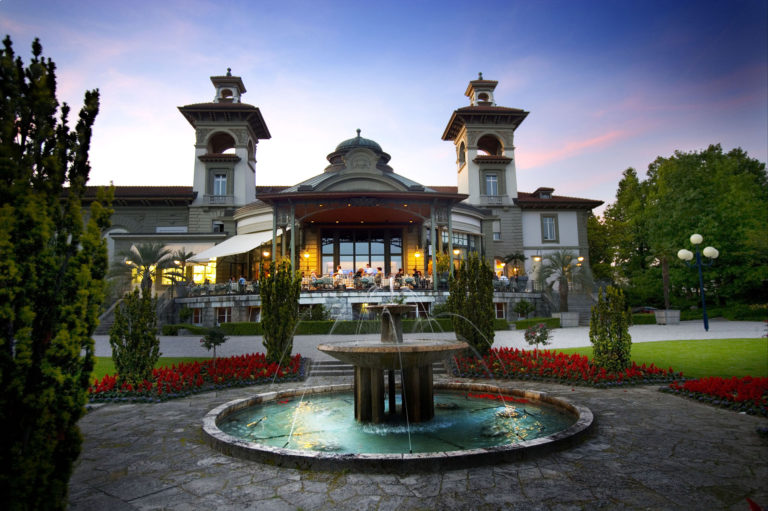 The Municipality put at his disposition the premises of the Casino of Montbenon, which went bankrupt in 1912 and that they bought for meetings and events of the local societies. The first theoretical conferences and sport lessons took place in spring 1917 for French and Belgian military detainees. But this institute did not survive the end of the Great War. The Casino will continue to house the annual meeting of the IOC and the 7th Olympic Congress in May-June 1921 during which time the international athletic organizations organize themselves against the IOC. Today, the Casino houses a restaurant and a Swiss film library.

5. The Domain of Dorigny

Since 1906, Coubertin thought to establish a permanent site for the Olympic games on the banks of Léman. 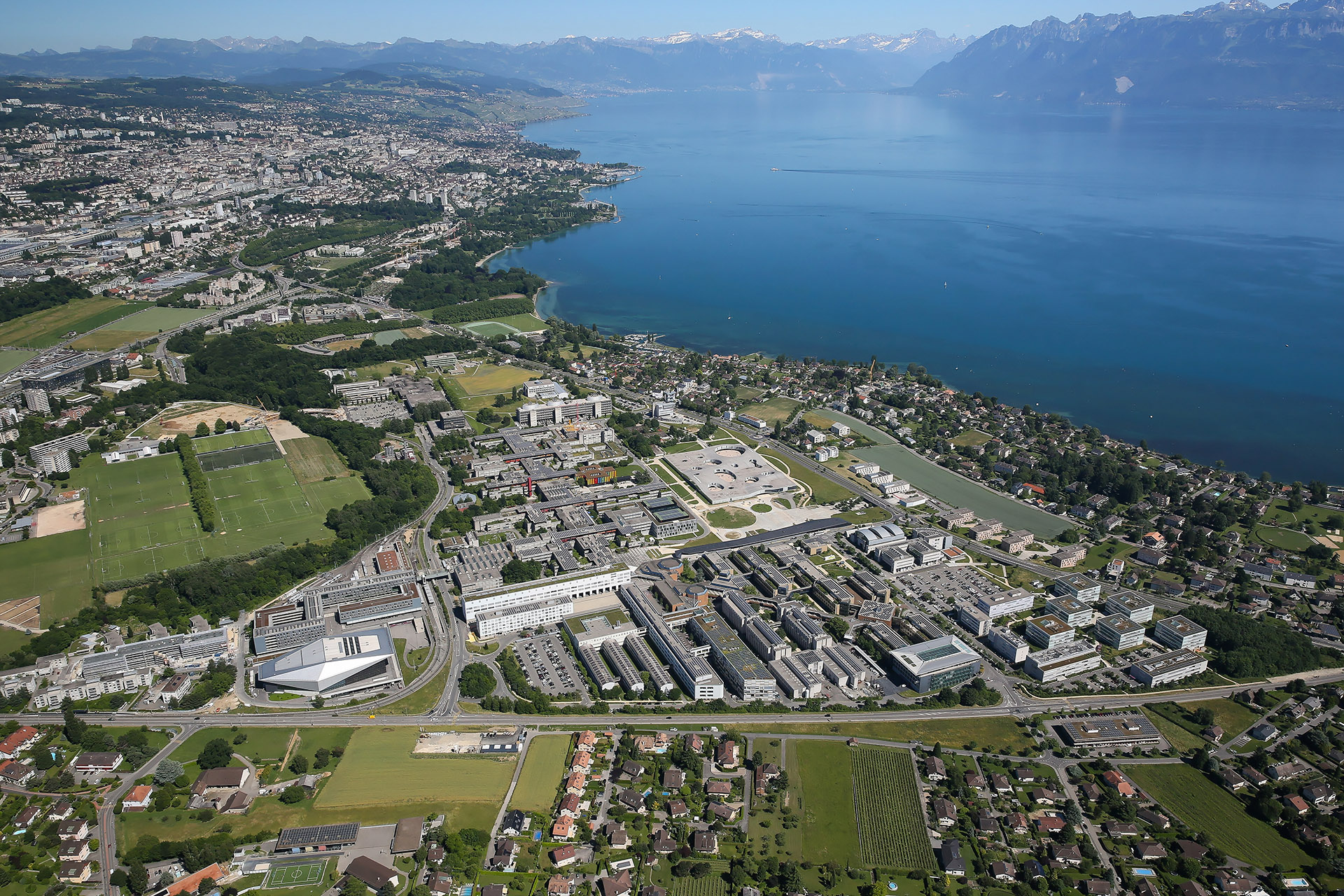 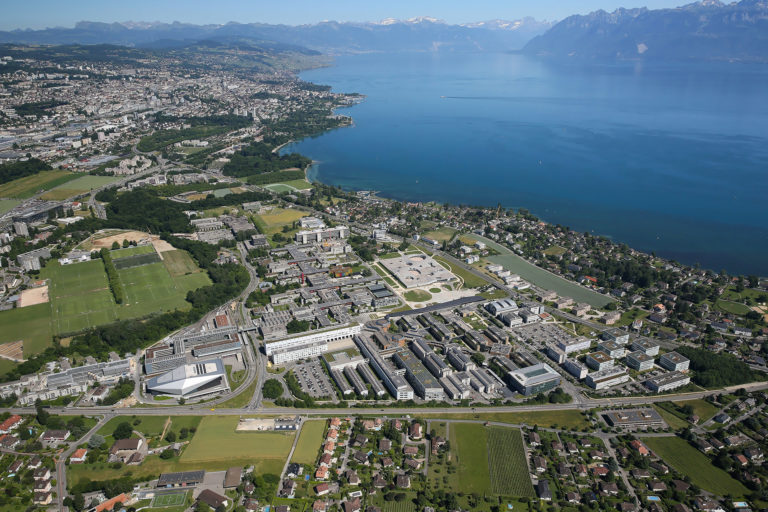 In 1911, he organizes to this effect an architectural competition, which is brought back by the architects Monod and Laverrière for a project situated at Morges. They received the gold medal for the first Olympic artistic competitions organized at the Games in Stockholm in 1912.
In 1918, a new project, inspired by the preceding one, is envisaged by Alphonse Laverrière for the agricultural domain of Dorigny. A public subscription for an “Olympic society” is launched but without success. The Olympic stadium is envisioned precisely at location of the building “Unithèque” (better known under the name “Banana”) at the University of Lausanne, moved to the site in 1970 from the Palace of Rumine. It was envisioned that a tramway would link Olympia to the city center, which is the case today. A more modest university athletic center stands at the edge of the lake, and the entire shore all the way to Vidy and Ouchy became a sport and relaxation zone.

In 1922, Coubertin leaves Paris permanently to move to Lausanne with his wife, daughter and son. The following year, the Municipality lends him an apartment on the third floor of the villa “My-Rest”. 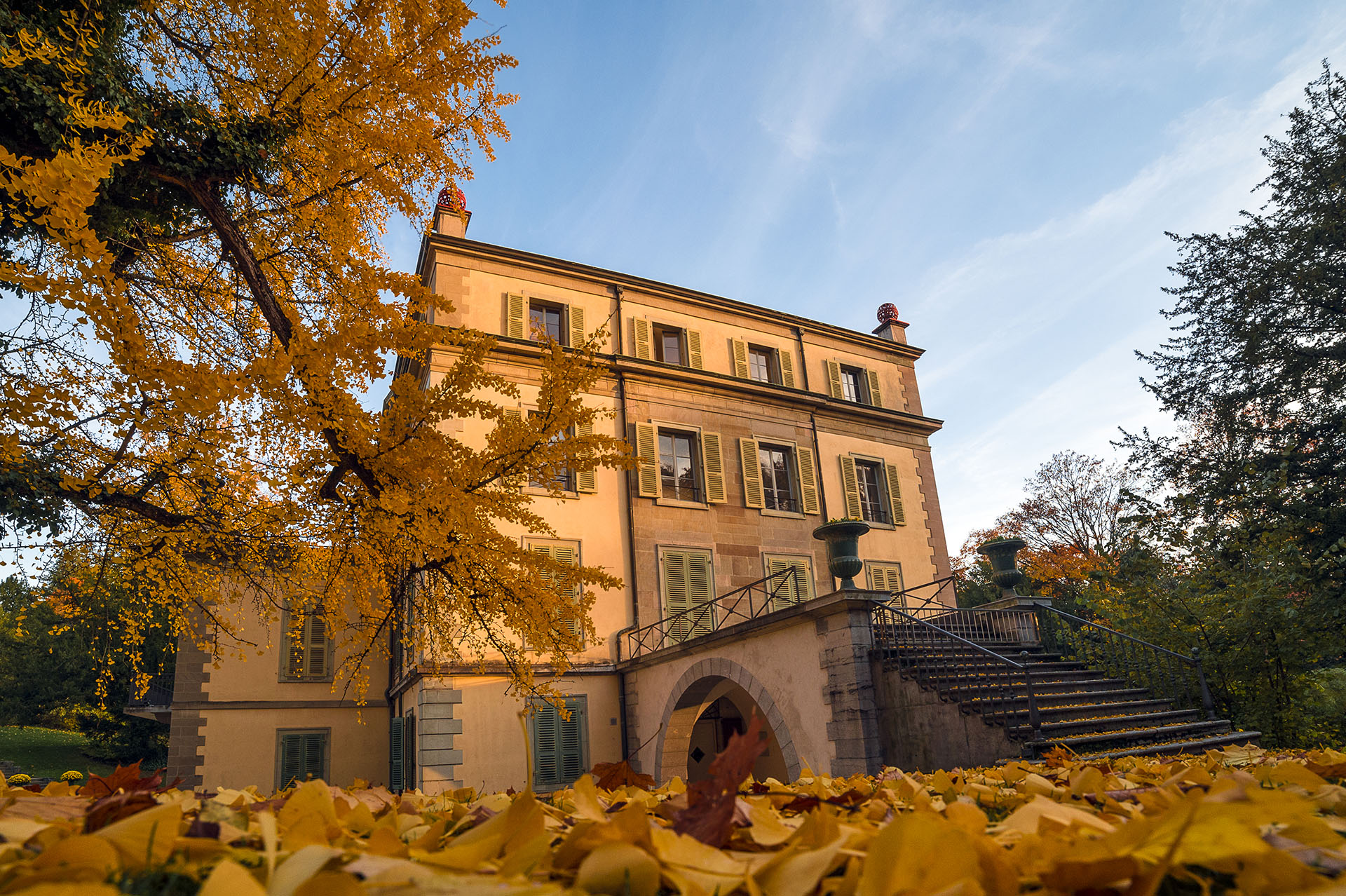 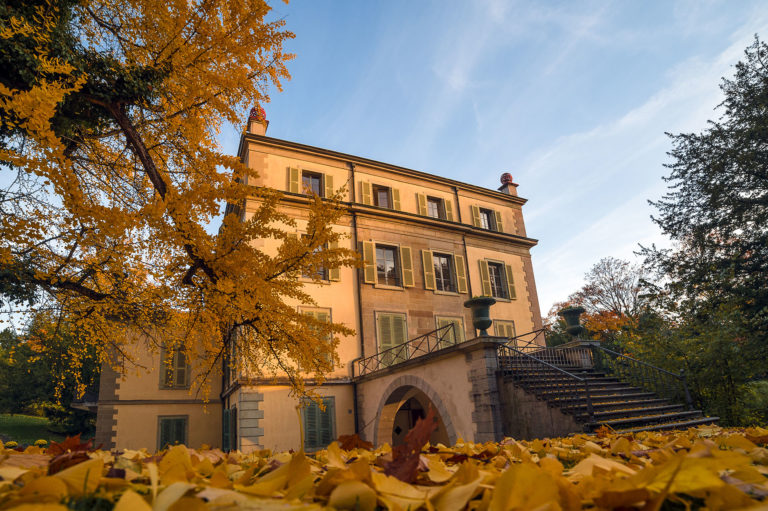 The headquarters and the archives are also set up in the villa along with the first Olympic Museum, which will remain open until the 1960s. The Baroness of Coubertin will live in the villa until 1963 at more than one hundred years old. His children will die before.
After his retirement from the presidency of the IOC in 1925, Coubertin dedicated himself to encouraging a candidature from Lausanne at the organization of the Summer Games and other projects. Today, the villa “My-Rest” houses the reception rooms of the city and on the second and third floor the offices of the Olympic Solidarity, the organization that redistributes the Games’ revenue to the national Olympic committees.

When he retires from the IOC, Coubertin founds the Universal Pedagogical Union. Its headquarters is in Lausanne. In September 1926, he organizes at the Castle of Ouchy the first conference on the pedagogical role of the modern Society, which proclaims that each citizen has the “right to sports” and the “right to access of general culture”. 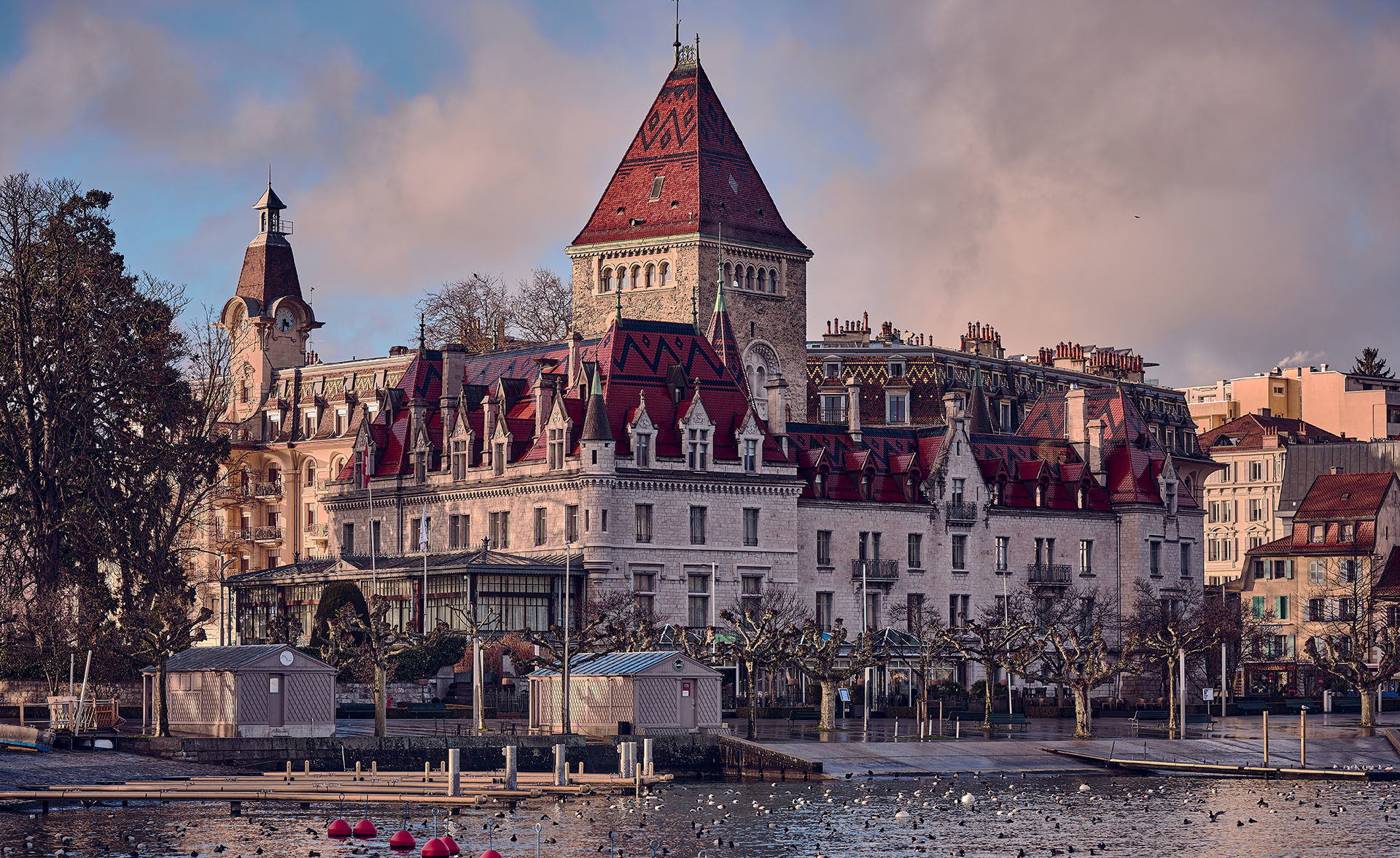 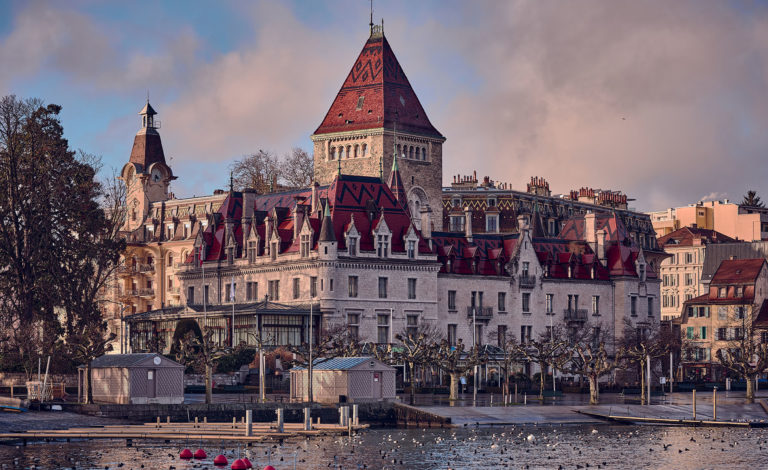 Despite Coubertin’s notoriety, this union is dissolved four years later. Other initiatives have hardly any success, and Coubertin does not get along with the new, “red” municipality, which, in spite of that, creates an impressive program of athletic installations. He resides in a boarding house in Geneva, but his office is still at villa “My-Rest”. Today the Castle of Ouchy, which dates back to the 19th century, is one of the fantastic hotels of Lausanne and is very close to the Olympic Museum, which was opened on the quay of Ouchy in 1993.

Coubertin dies in Geneva on September 2, 1937 from a heart attack in the park La Grange. 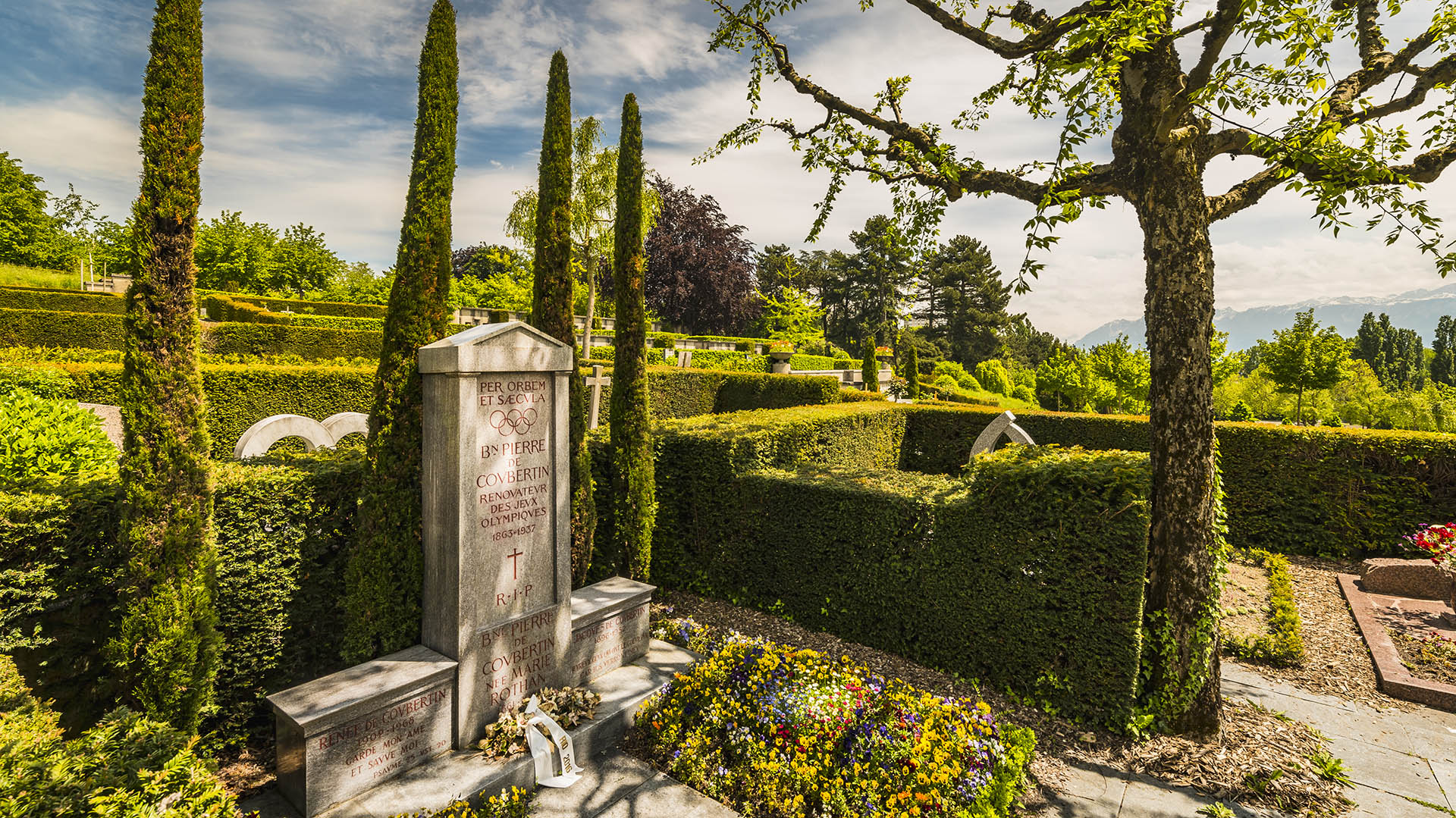 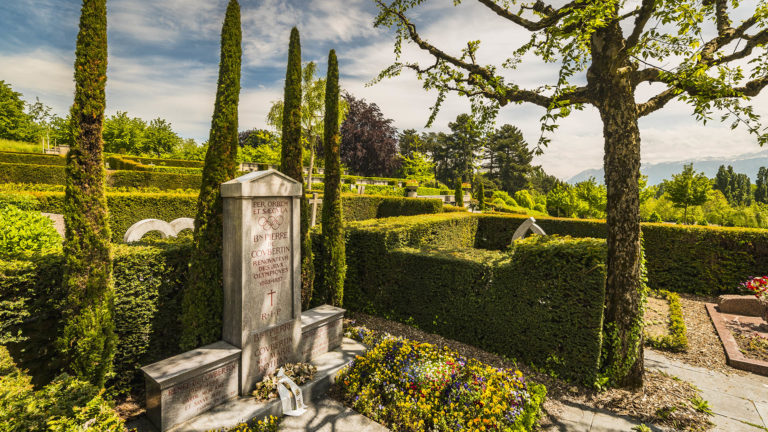 His funeral took place in the church Notre Dame of Valentin in Lausanne, and he is buried in the cemetery of the Woods-of-Vaux, which was designed by Alphonse Laverrière. In 1937, he becomes the tenth man of honor of Lausanne, but he didn’t have the chance to receive this honor before his death. Coubertin’s heart rests in Olympia. Today, Olympic visitors regularly decorate his grave with flowers, and the cemetery is a wonderfully tranquil yet little known park.